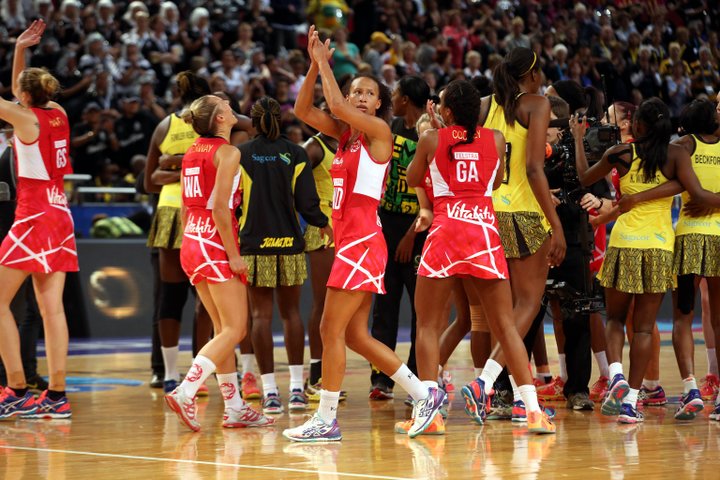 England produced their finest performance of the tournament to overpower the Sunshine Girls 66-44 and take the bronze medal at the World Cup in Sydney earlier today.

It has been a rollercoaster two weeks for the Roses and the pattern resumed this morning. They fell behind early on but surged back to take a five goal half-time lead.

As Jamaica battled to find a way back in to the contest, England applied incredible pressure to force their opponents into mistakes and eventually cruised clear to take their place on the podium.

Tracey Neville named an experienced starting seven with all of those on court having at least 50 caps to their name and all having won bronze at the 2011 World Championships in Singapore.

Experience was not counting for much early in the encounter. The teams traded goals in the opening minutes but it was the Caribbean side that made the early impact.

A couple of attempted feeds into the circle were disrupted by the Jamaican defence and the turnovers were lofted into a waiting Romelda Aiken.

The ANZ Championships regular was cool under the post and with her excellent accuracy, the Sunshine Girls marched into a 16-11 lead at the end of the opening fifteen minutes.

With Jamaica finding the target figure of Aiken in the circle, Neville swapped Eboni Beckford-Chambers for Sonia Mkoloma and she became the fourth England centurion on display.

The change worked as Mkoloma closed down space and added physicality in the defensive end. The extra intensity had the Roses pumped up and nobody more so than Serena Guthrie.

A phenomenal period of play in the second quarter saw Guthrie drag England back into the lead with a number of sensational steals.

The turnovers were converted with regularity via a vocal Jo Harten. A five goal deficit had turned into a five goal advantage at the interval. England had pushed 28-23 in front.

Momentum was with the team in red and they came out firing again in the second half, a Tamsin Greenway intercept kept the Allphones Arena rocking.

Defensive pressure from Geva Mentor and Mkoloma was worrying the Jamaica attacking unit as they started to falter with their passing accuracy.

England could smell blood and they pounced. Harten continued to make shots from all over the circle and she was being supported by an incredibly hard working Pamela Cookey. At the end of the third quarter the advantage had increased to 45-33.

Any hope of a late comeback from the Sunshine Girls was immediately snuffed out in the opening passage of play of the final quarter. A lofted pass was ruthlessly grabbed by Mkoloma and Cookey applied the finishing touch.

Jade Clarke and Greenway refused to let the intensity relent as they rushed the ball through court to allow Harten to entertain the crowd with a flurry of incredible goals.

A majestic long range effort was swiftly followed by a breath-taking jump shot as the Roses clinched the bronze in wonderful fashion.

The record-breaking crowd rose to their feet to applaud a world class display from the England Roses as they took revenge for a defeat at last year’s Commonwealth Games in the sweetest of styles.